THE CUISINEIST: CAPONE FAMILY SECRETS ARE SHARED AT CAPO'S RESTAURANT

Capo's, is reminiscent of Prohibition Era speakeasies’; just getting into the front door is a feat in itself. Recently we had the chance to join this one of a kind restaurateur at a VIP party held at the opulent Parisian Palace to launch Nico Santucci’s new line of Italian pasta sauces using some very special recipes including Al Capone Family’s Secret Recipes. 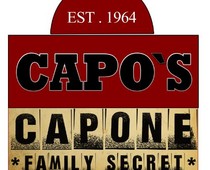 The Capone recipes have been secret for over 80 years and have escaped raids by Federal Agents on Al Capone’s residences and other locations. And now, it’s no secret that these sauces and other specialty food products can be enjoyed by all of us thanks to Mr. Santucci and the Capone family.
As we walked into the Parisian Palace we passed a 1920’s era “gangster” car and were greeted by lovely flapper girls who opened the door into a wonderland of opulence. Each room was decorated with a specific theme and even a bowling alley and night club allowed guests to experience almost any environment they could imagine. 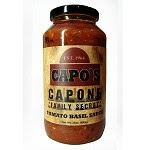 We wandered passed rooms full of “gangsters” sipping on cocktails and enjoying some great dishes featuring these very special sauces. "We hope to bring some of these incredible specialty sauces and recipes the light they deserve; Santucci went on to add, “The savory marinara recipe may be the best I've ever sampled. In fact, my Capo's Restaurant in Las Vegas has adjusted the menu to include the traditional red sauce and spicy Rustico.”

The kitchen was abuzz with activity as guest after guest sampled meatballs drenched in Capone recipe sauces. This was not just a launch party but a fundraiser for Safe Nest, an organization that helps abused women and children. 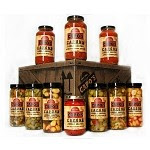 The Capone Family Secret sauces and other specialty items can be found at Capo’s Restaurants and on its website www.caposfoods.com.Who could ask for a more perfect partnership than the agreement between Nico Santucci and Dominic Capone, grandnephew of Al Capone.

There was no better way to experience an 80 year old recipe from a very well known family than at The Parisian Palace. These products are also served nightly at all Capo’s Restaurants. A night of legends it truly was but the true greatness of traditional Italian products will be carried on through the Santucci and Capone legacy.
Newer Post Home